Despite the East Bay Bridge closure, Rim Fire and several other twists and turns — it took more than nine hours to get to there from SF — this was a most excellent journey. A whole week spent on the most amazing little 51-mile loop in Yosemite National Park. I can’t wait to go back! 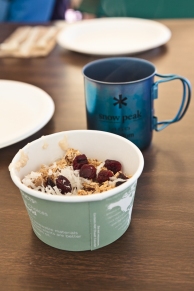 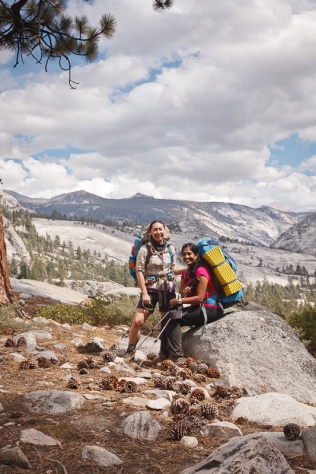 One day, very soon, all of this will be spruced up, removed, renovated or at least refurbished, which I suppose is better than rusting and rotting … But I’m savoring the last moments anyway before Pier 70 is really history.

Check out the vision for Pier 70 on the Port of San Francisco’s website and also at Pier 70 Waterfront Project. 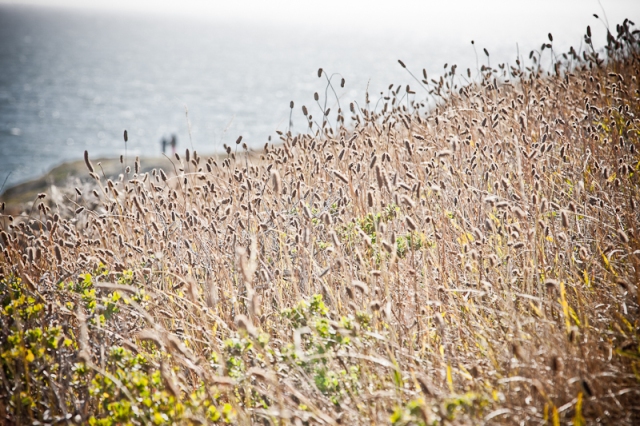 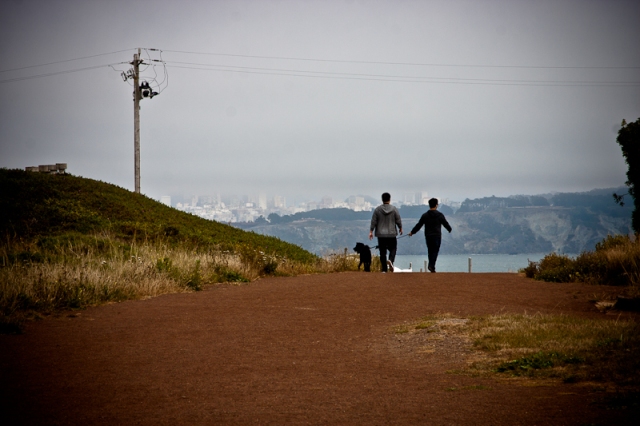 The remains of the lighthouse keeper

Made my third annual pilgrimage to Ano Nuevo State Park in early January. My friend Tony and I have been coming here every year since I moved to California. It’s a very apt and beautiful place to start the New Year.

Ano Nuevo Point was named by a Spanish chaplain on January 3, 1603. He spied the coast from the deck of explorer Don Sebastian Viscaino’s ship and, though he never stepped foot on the land, named it honor of the New Year. (Read more about Ano Nuevo’s history.)

The state park also includes Ano Nuevo Island. Only open to researchers, the island and its long-deserted Victorian house make for a striking addition to the coastal views. (Read more about Ano Nuevo Island Light Station.)

At this time of year, thousands of female northern elephant seals give birth and then nurse their young. The males spend their time defending their harems or plotting sneak-attacks in hopes of capturing and impregnating another’s female. (Not exactly romantic, but, since the elephant seals are thriving, this method seems to be getting the job done.)

In March, the adults return to the sea. After having spent three months on land with no food, they have lost up to a third of their body weight. The pups remain behind and have a few more weeks to hone their swimming skills before they, too, will leave the land.

Returning seals have to get past the bevy of Great White sharks that thrive in Northern California’s coastal waters. If they survive and make it into the deep blue, their yearly cycle will begin again.

Elephant seals can dive up to 5,000 feet (1,524 m) and stay down there for as long as two hours. The females tend not to hunt as deep as the males, as they’re partial to squid. The boys are, naturally, bottom-feeders and live off the likes of skate and crab.

Friends of the Elephant Seal (FES), which supports the recently formed colony at Piedras Blancas, near San Simeon, Calif., has a nice FAQ page on the Northern Elephant Seal.

I also re-read “Elephant Seals” by Carole and Phil Adams (1999) each year before my visit. You can purchase the book via the FES online shop, as well as in person at the Ano Nuevo State Park store.

If you want to see the Ano Nuevo colony, you must sign up for a docent/ranger-lead tour. You’ll get up close to the seals and support a good cause. Reserve far in advance, particularly for weekend slots. 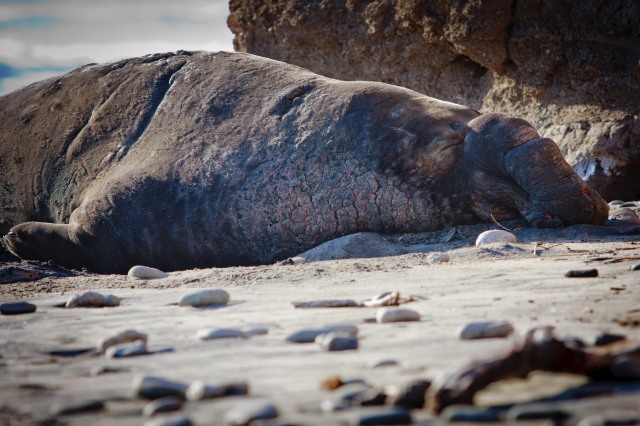 Elephant seals are sexually dimorphic. In other words, the males and females grow up to be quite different in shape and size. Males can weigh up to 5,500 pounds (2500 kg), while females max out around 1,800 pounds (545 kg). The signature proboscis, for which the species gets its name, is only characteristic on male elephant seals. Their "trunk" can grow up to two feet long! 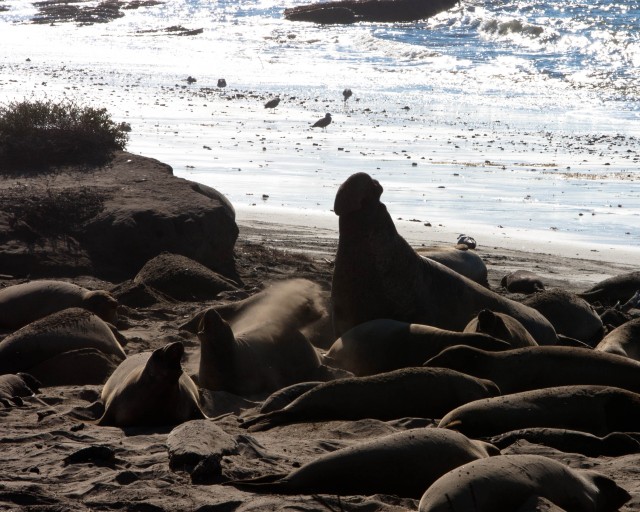 Alpha male elephant seals oversee harems of anywhere from 10 to 50 females. Beta males patrol the periphery, fighting off any would-be usurpers. Their payoff? A chance to mate should the Alpha find himself otherwise too preoccupied to care.

Elephant seals have nails on their fore flippers. They are quite adept at scratching themselves, which, at least while on land, they seem to do often. 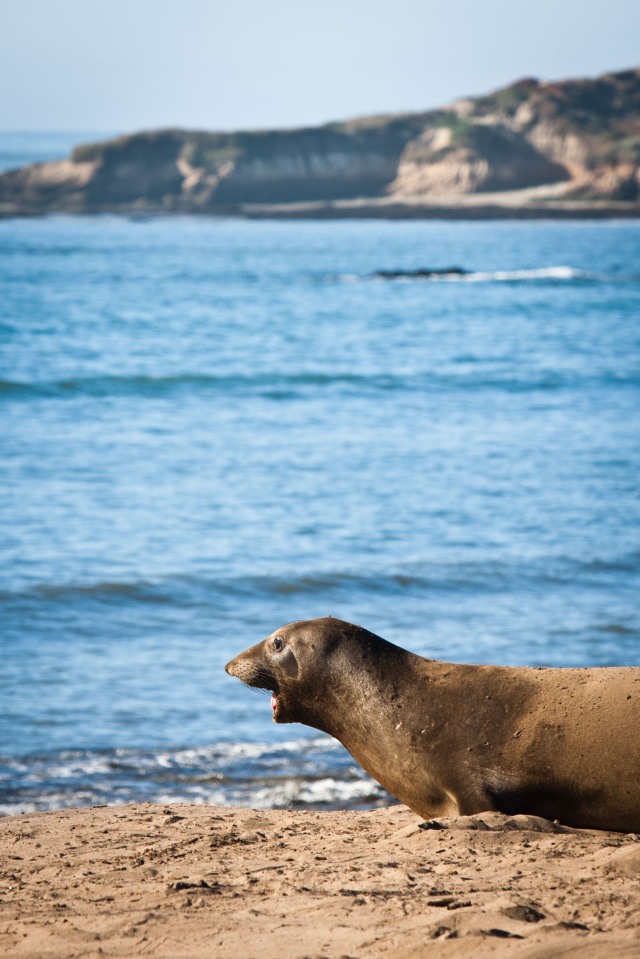 Females and their offspring communicate through unique calls. If you see a female barking, she may be calling to her pup.

A pup barks at a meddlesome seagull. Rangers know there

Best suited for life in the chilly waters of the open Pacific, blubbery elephant seals cool themselves on land by flicking sand on themselves. The grains may also act as a kind of sunscreen. 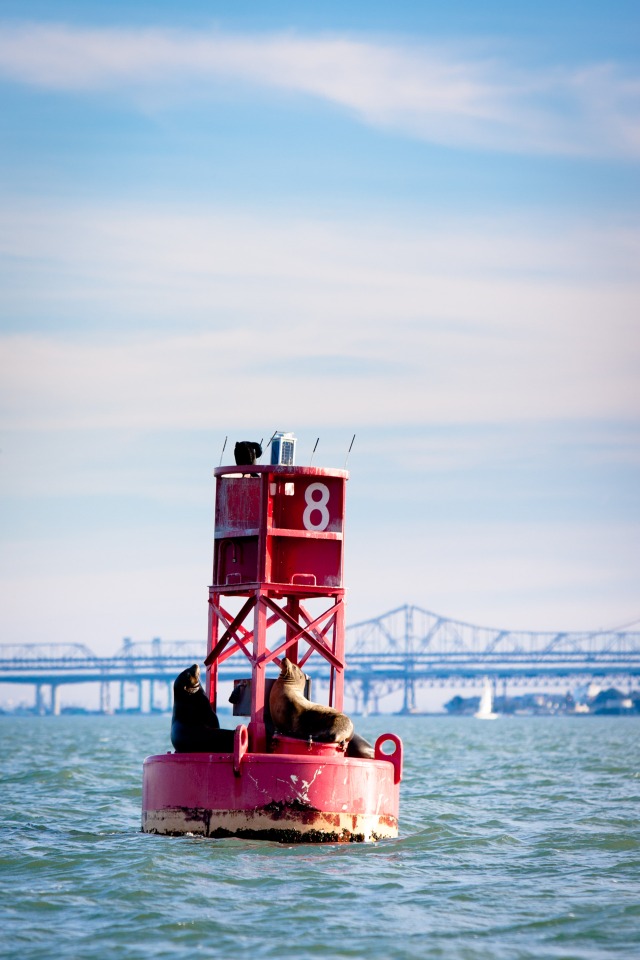 This was my first time out with my new telephoto lens (Canon EF 70-200 mm f/2.8L). I saved money by scrimping on the Image Stabilization feature. (It was still an expensive lens!) Thought I was being crafty, as I’d read enough reviews saying it wasn’t quite necessary. 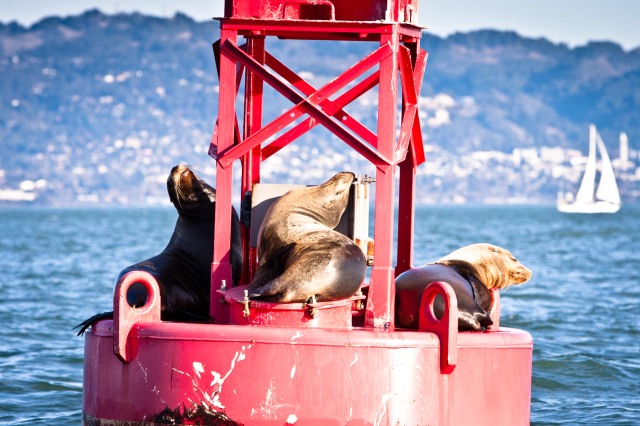 But then I bet those folks weren’t bobbing on a boat, trying to photograph fidgety sea lions, who are themselves on a bouncing buoy. As you can imagine, this makes for a lot of blur. Oh well, at least a few of my shots turned out OK!

Wish I was sitting over there ... 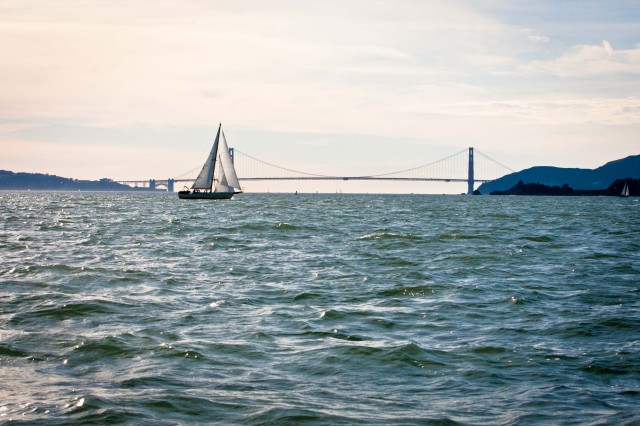 A sailboat races past the Golden Gate Bridge.

I’ve been sailing on the San Francisco Bay quite a bit this year. It’s amazing how quiet it can be when you switch the motor off — just the sound of the wind whipping the sails above and the water slapping the boat beneath. It seems nearly impossible that you are floating just off the shore of a major metropolitan area.

The views of the city and landmarks, such as the Golden Gate Bridge and Alcatraz Island, are phenomenal, and it’s hard to tire of whiskered sea lions barking from their favorite buoys.

Still, sometimes the prettiest sights are the ones that greet you on your return. The Berkeley Marina tends to be a surprise stunner at sunset!

Sailboats in the sunset.

The view toward to Bay from the shore of the Berkeley Marina in Berkeley, Calif.

Hummingbirds remind me of my late mother. They’re small, beautiful and extremely quick — alive and abuzz with energy.

I shot this photo over the summer and have been meaning to post it ever since. It’s not the most technically superb of images, but I was proud just to have snapped a clear view of one of these little birds. 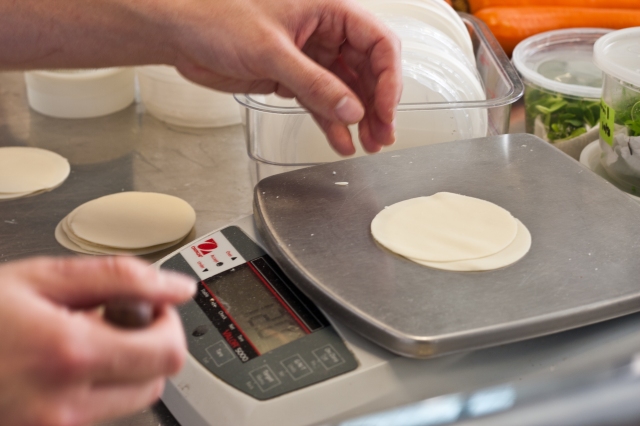 Heron’s Head Park sits near the southeastern edge of San Francisco. You can see downtown’s skyscrapers in the distance, but they truly feel worlds away. The 24-acre-park is home to salt marshes and a small ecological center with a living roof and sustainable water system. It used to be Pier 89, and remnants of its former life scatter the park grounds. But despite the hulking cranes, stacked box cars and strips of industrial landscape that sandwich it on either side, the Heron’s Head has the fresh smell of California’s coastland. Gulls and ducks and, of course, herons linger in the water. The winding sandy paths feel desolate and beautiful all at once. 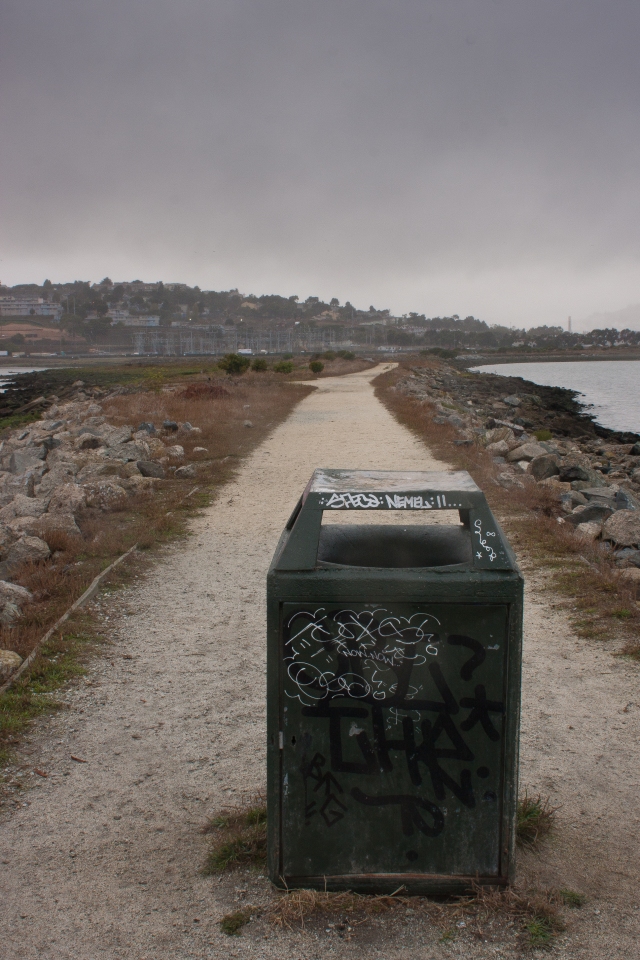 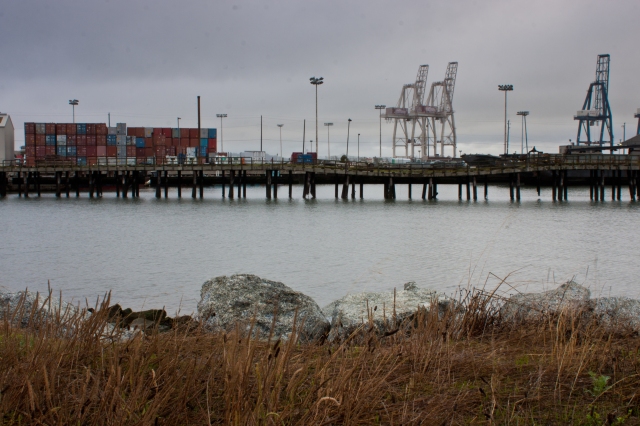 I spent last night skulking around my sleepy neighborhood. Aside from the recycling scavengers, there were few folks on the street. Cars were even rare on busy Dolores. But the views were still perfect on what was a cloudy but clear SF night. 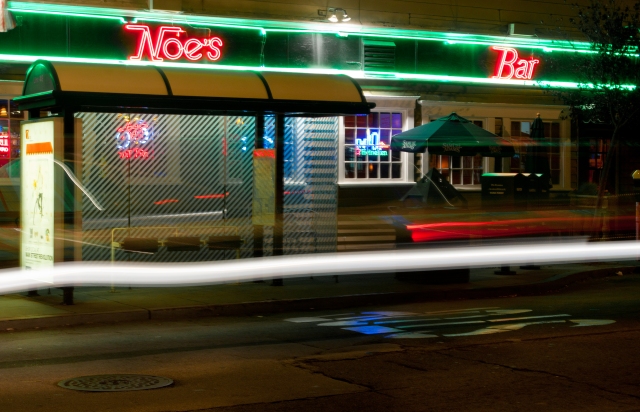 A bar and a bustop at the corner of Church and 24th Street.

The top of Dolores and 25th streets, looking down, across the Mission District and eventually to the Bay. 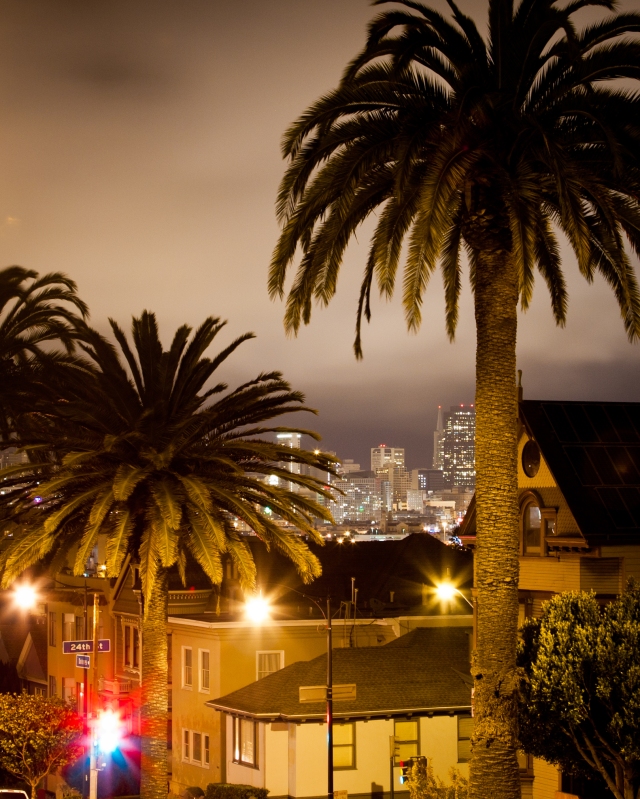 Is this Miami? No, just the palm trees lining Dolores Street. Miami would never have all that fog!